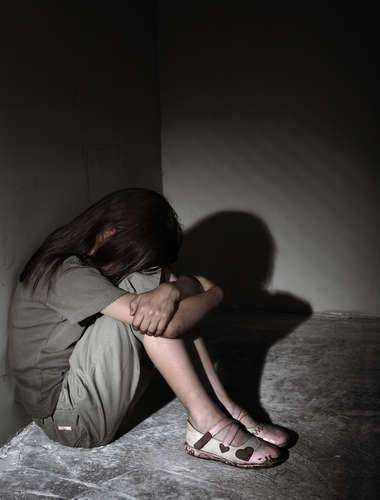 Sexual child abuse occurs when an adult forces or allows a child to take part in any form of sexual activity in order to experience sexual stimulation. Approximately 90,000 instances of sexual child abuse are reported every year. It is estimated that 25% of women and 15% of men were exposed to sexual child abuse as children. Sexual child abuse includes displaying genitals to a child, making a child expose his or her genitals, exposing a child to pornography or using a child to create pornography. Touching a child’s genitals or making a child fondle another individual’s genitalia is sexual child abuse, as well as penetrating a child.
Physical abuse may accompany sexual abuse. However, if the perpetrator is a relative or someone who is close to the family, then they will attempt to keep the physical markers minimal so that they are not noticed. Often, a sexual child abuse victim will not tell anyone about the behavior that is being inflicted on them because they will be afraid that people will not believe them. If the abuse is being inflicted by a family member, then they may not expose the secret because they fear that telling anyone about the abuse will anger or destroy their family.
Many children who experience sexual child abuse feel ashamed and guilty, and they feel that if they tell anyone about what is happening to them they will be the one who is blamed for the abuse. The individual who is inflicting the abuse may silence the child by threatening them in a variety of different ways. Even if there is no apparent physical evidence of sexual abuse, there will usually be psychological markers that are very evident.
Sexual abuse is extremely traumatic for a child, especially when the offender is someone that the child loves and trusts. Sexual abuse may have long lasting psychological effects on the child abuse victim. A sexual child abuse victim may develop severe depression and become extremely antisocial. They may not engage with their friends and family in the way that they used to.
They may begin to fall behind in school or display an unwillingness to go to school. Often, a sexual child abuse victim will feel uncomfortable with the normal affection that they receive from friends or family members. Victims may also become extremely uncomfortable with anything of a sexual nature and may become uncomfortable changing their clothes in front of anyone. On the other hand, some victims will be begin to display knowledge of a sexual nature and they may become sexually active at a young age.
A sexual child abuse victim may feel that they are worthless and may develop the mentality that their body is dirty. Oftentimes a victim of this form of abuse will become aggressive or nervous around adults. They may become extremely wary of trusting adults. In most cases, a child who has been subjected to sexual abuse will experience a change in behavior or a change in personality.

All You Need to Know About Varying State Services

What You Need to Know About Insecure Feelings